Upon closer examination, we realize we really do know this holiday. It is more widely known as its French term “Mardi Gras.” Its roots lie in the Christian religion, marking the last celebration before the Lent season, starting with Ash Wednesday on March 5.

But until we get all serious and somber by giving up something like chocolate for 40 days (and then breaking the rule every other day), our ancestors examined this strict religious holiday and decided that everyone deserved to let loose the day preceding.

I like what author Chris Rose said about Mardi Gras best in his book “1 Dead in Attic,” which later went on to become a New York Times Best Seller. Though the quote is long, the former New York Times writer is eloquent and I think fully captures the idea of Mardi Gras.

Mardi Gras is bars and restaurants changing out all the CD’s in their jukeboxes to Professor Longhair and the Neville Brothers, and it is annual front-porch crawfish boils hours before the parades so your stomach and attitude reach a state of grace, and it is returning to the same street corner, year after year, and standing next to the same people, year after year–people whose names you may or may not even know but you’ve watched their kids grow up in this public tableau and when they’re not there, you wonder: Where are those guys this year?

It is dressing your dog in a stupid costume and cheering when the marching bands go crazy and clapping and saluting the military bands when they crisply snap to. Now that part, more than ever.

It’s mad piano professors converging on our city from all over the world and banging the 88′s until dawn and laughing at the hairy-shouldered men in dresses too tight and stalking the Indians under Claiborne overpass and thrilling the years you find them and lamenting the years you don’t and promising yourself you will next year.

It’s wearing frightful color combination in public and rolling your eyes at the guy in your office who–like clockwork, year after year–denies that he got the baby in the king cake and now someone else has to pony up the ten bucks for the next one.

Mardi Gras is the love of life. It is the harmonic convergence of our food, our music, our creativity, our eccentricity, our neighborhoods, and our joy of living. All at once.”

If you weren’t in love with the idea of the carnival ahead of time, you are now. Since most of us can’t actually go to New Orleans tomorrow to celebrate the final day of the Mardi Gras celebration, bring a little Mardi Gras to you. Here is a recipe for King Cake, a staple to the celebration. 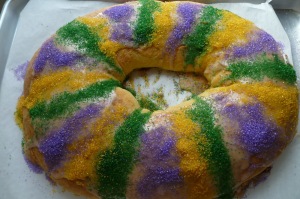 Celebrate Fat Tuesday with friends and see who finds the baby in their pastry and is crowned “King” of the party.